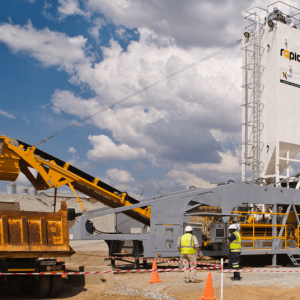 KwaMhlanga Group is a large, diverse, civil engineering contracting group, which operates in the construction, slip form concrete, continuous mixing and paving, plant hire and property development sectors. Established in Gauteng, South Africa in 2007, the group has established itself as one of the leading contractors in north-eastern South Africa.

KwaMhlanga Group purchased the Rapidmix plant for the purpose of road rehabilitation via base layer stabilisation and road construction by the use of subbase layer stabilisation. The Group’s previous production process resulted in inaccurate blending of emulsions and cement into aggregates and lower than desired outputs. In an effort to overcome these limitations, KwaMhlanga set out to source a more effective equipment solution. After several years of comprehensive research, KwaMhlanga decided to invest in the Rapidmix 400CW mobile continuous concrete mixing plant. Francois Bakkes – Operations Director – KwaMhlanga Group, confirmed, “KwaMhlanga did research for several years on aggregate mixing and found the very best solution in the Rapidmix. The Rapidmix is a hi-tech plant that is manufactured to last and offers maximum production.” Mr Bakkes further remarked that the Rapidmix ordering and fulfilment process was straightforward and, “…after a week of onsite training and commissioning of the plant, full production was attained.”

Commenting on the accuracy improvements achieved as a result of Rapidmix, Mr Bakkes stated, “(The Rapidmix plant) has provided high accuracy stabilisation.” Rapidmix offers full weighing of all materials – aggregates, cement and water, addressing the Group’s difficulties with blending accuracy. The machine’s cement silo offers weighing capabilities via dual rotary valves and load cell suspended screw conveyors. Rapidmix also features a weigh belt, weighing material from the aggregate hopper to the mixing chamber. The integral control system enables automated, precise and detailed record keeping and storing of multiple recipes for the proportioning of different materials. Due to its advanced design and powerful performance, the pugmill mixer ensures excellent encapsulation of aggregates and can be used in a variety of applications including cement bound materials and bitumen emulsions. 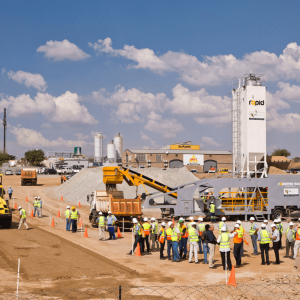 In terms of throughput improvements, the Rapidmix 400CW mobile continuous concrete mixing plant is capable of achieving outputs of up to 400 tonnes per hour, a substantial increase for the Group. Francois Bakkes – Operations Director – KwaMhlanga Group commented that the Rapidmix plant has “…almost doubled the roadworks production on their construction sites, resulting in more competitive pricing in the market.” Mr Bakkes further remarked on the Group’s ability to quickly utilise aggregate stockpiles and over surplus due to the machine’s high throughput, resulting in the achievement of “…major time savings.”

Recognising the potential of the Rapidmix’s new technology for South African infrastructure, KwaMhlanga Group have begun preliminary testing of RCC (roller compacted concrete) on existing roads. RCC was first developed in the 1970’s and is already well established in the USA, UK, Philippines, Spain, Croatia, Poland, Latvia and France. The Group intend on presenting their test results to local government authorities with a view to introducing this application within South Africa. This will result in a major boost for the Rapidmix within South Africa, once approved.

The Rapidmix 400CW plant produces high quality controlled mixtures for utilisation in a range of applications – from airport runways and contaminated land treatment to dam construction and soil stabilisation. The mobile nature of the plant combined with the technically advanced design, is most advantageous in meeting the supply and demand requirements on projects. The Rapidmix provides a cost effective solution for on-site projects where high specification compliance coupled with a high volume fast throughput are essential.

Fully mobile and self-contained, the Rapidmix 400CW is a complete plant powered by its own power source, with on-board compressor and generator. Fitted with a self-erecting system, using hydraulics, the plant can change from travel mode to fully operational within a few hours. Available with outputs of up to 600 tonnes per hour, the Rapidmix provides feed rates that are fully adjustable for the aggregate, cement and water systems.