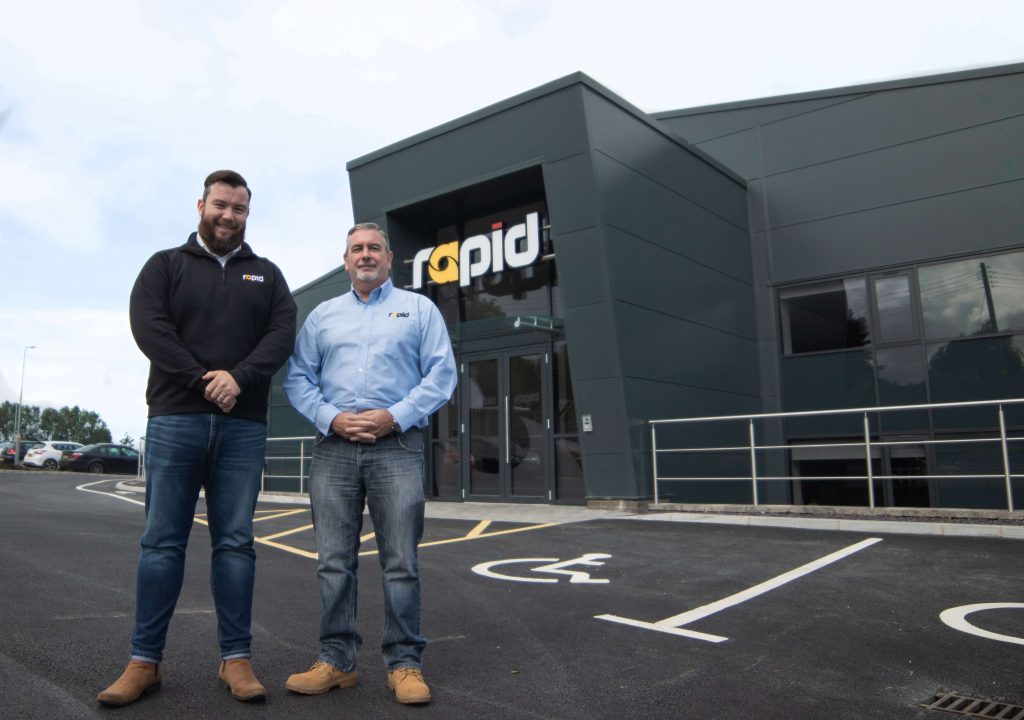 Rapid International Ltd, celebrates its 50th anniversary on 1 September 2019. Established in County Armagh, Northern Ireland in 1969, the company is one of the world’s leading manufacturers of mixing technology for the concrete, construction, environmental, nuclear, mining and tunnelling industries.

In 1969, at a period in Northern Ireland’s history when political and sectarian violence were commonplace, Rapid’s founders, Robert (Bertie) Pickering and Jim Lappin intended to bring about advancement, progress and hope for the local economy. Founded on 1 September 1969, Craigavon Engineering, originally manufactured agricultural equipment in a humble 7m x 4m domestic garage. From the outset, Bertie and Jim were renowned for their exacting quality standards and customer focus. Demand subsequently grew and in the 1970’s the business relocated to a larger custom built facility, diversifying into manufacturing ready mixed and precast concrete plant. Today, each machine is produced in Rapid’s 50,000 square foot purpose built factory, which underwent a recent extension to include a new £1 million state of-the-art Hodge Clemco shot-blasting facility and Dalby paint booth.

First concrete mixer still operational today, 37 years later
In 1982, Rapid launched the first in a range of concrete mixers, the Rapid Pan. The very first of these was sold to J Graham and Sons Ltd in County Down, Northern Ireland, and is still operational today, 37 years later. The product range later expanded in 1992 to include the novel Rapid Reclaimer, a reclaiming unit for the recovery of unused concrete. The ground-breaking invention was met with industry acclaim and featured on BBC’s Tomorrow’s World.
Rapidmix, Rapid’s flagship product, was first launched in 1997 and later adapted to include full weighing capabilities in 2012. Rapidmix is a totally mobile and self-contained, high volume continuous mixing plant ideal for a wide range of concrete, construction, civils and environmental applications. 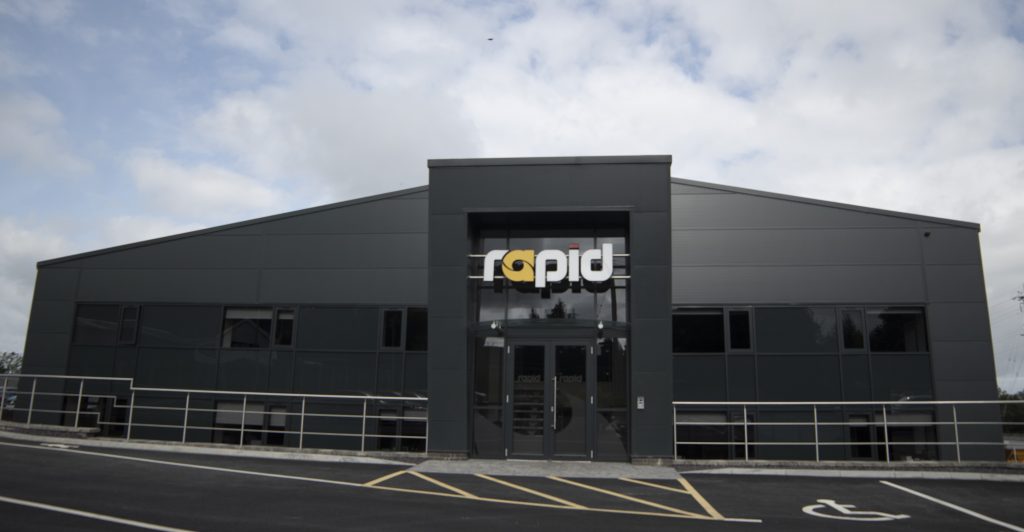 New product development remains a strong focus for Rapid and the product range has expanded considerably since 2009. Rapidbatch, Rapid’s first fully mobile concrete batching plant, was launched in 2009, as was the Rapid twin-shaft concrete mixer. Transbatch, a compact, single load version of the Rapidbatch plant, was launched in 2011, followed by Trakmix, an innovative track-mounted mobile continuous mixing plant in 2015.
In recent years, Rapid has witnessed a demand shift towards specialist applications such as contaminated land treatment, mine back fill, tunnel finings, marine dredging, bentonite and many more. Rapid’s in-house team of highly qualified and experienced design engineers, sales team and skilled operatives work in total collaboration with the customer to achieve a completely bespoke solution.

Rapid commences exporting
After the success of the Reclaimer launch the company set its sights on penetrating international markets and in preparation for this, changed its name to Rapid International Ltd. Rapid officially commenced exporting in 1995, initially to the USA and later in 1996 to the Middle East. Today, Rapid has a presence in over 20 countries via a wide reaching international dealer network.
Sadly, in 2007, Robert (Bertie) Pickering, co-founder and Managing Director, passed away after a short illness, later followed by fellow co-founder Jim Lappin in 2018. Mark Lappin, son of co-founder Jim Lappin, was subsequently appointed Managing Director and continues to lead the company to the present day. While Rapid’s operations have expanded, the families underlying principles of hard work, trust, feedback, care, collaboration and relentless dedication to quality have remained constant to the present day. 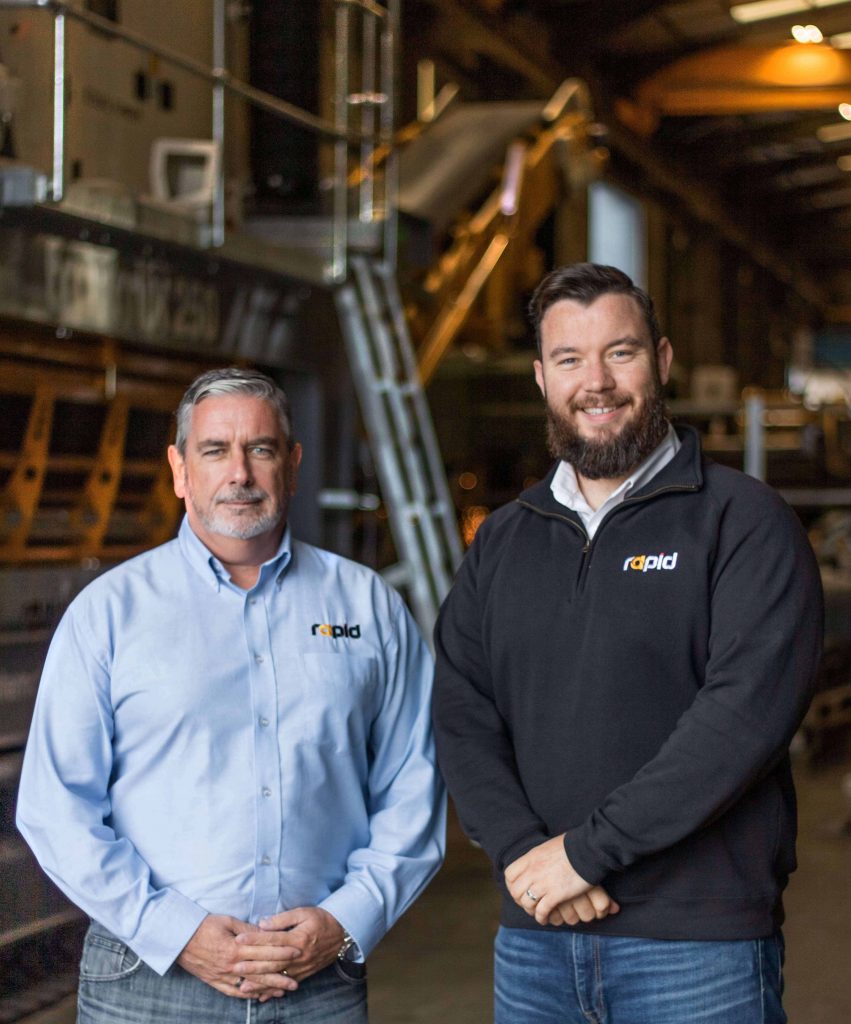 Entrepreneurial spirit drives Rapid’s success
Commenting on the milestone, Mark Lappin – Managing Director, remarked, “As we reflect on the last 50 years, it’s clear we owe our continued success to the entrepreneurial spirit of our founding partners, which the company is still driven by today. We continue to push boundaries, seek out new product innovations and enter new global markets on an annual basis. As was the case in 1969, total quality, technological advancement and customer focus still remain at the core of Rapid.”
Mark continued, “It’s been my privilege to lead Rapid for the last 13 years and personally witness Rapid’s success for 30 of its 50 years. We wish to sincerely thank our customers, dealer partners and suppliers for the loyalty and trust they have placed in us over the last 50 years. We look forward to continuing these partnerships in the years that lie ahead.”

Charity gala
Rapid will be hosting a 50th anniversary charity gala dinner and raising funds for Marie Curie and Macmillan Cancer Support in memory of Rapid’s co-founders. The company hopes to raise a generous sum to support these two very worthy causes. If you wish to offer a charitable donation, please visit: www.justgiving.com/crowdfunding/rapid-international